In the past 5 years, theatrical activities in social subjects, especially literature, have taken place strongly at The Olympia Schools, especially in middle and primary schools. Behind the story of literary theatricalization are the teachers' wishes to promote students' love of language and creativity.Drama is one of the subjects (along with poetry and stories) taught in Philology at The Olympia Schools. However, not limited by the small number of periods as in the general program, the theater stage at Olympia has a great length, diverse genres, and is rich in expression with higher goals to promote multiple intelligences in students. To understand better about the literary stage at Olympia, we had a conversation with Ms. Hong Lien, Head of Literature team at Olympia Middle School. 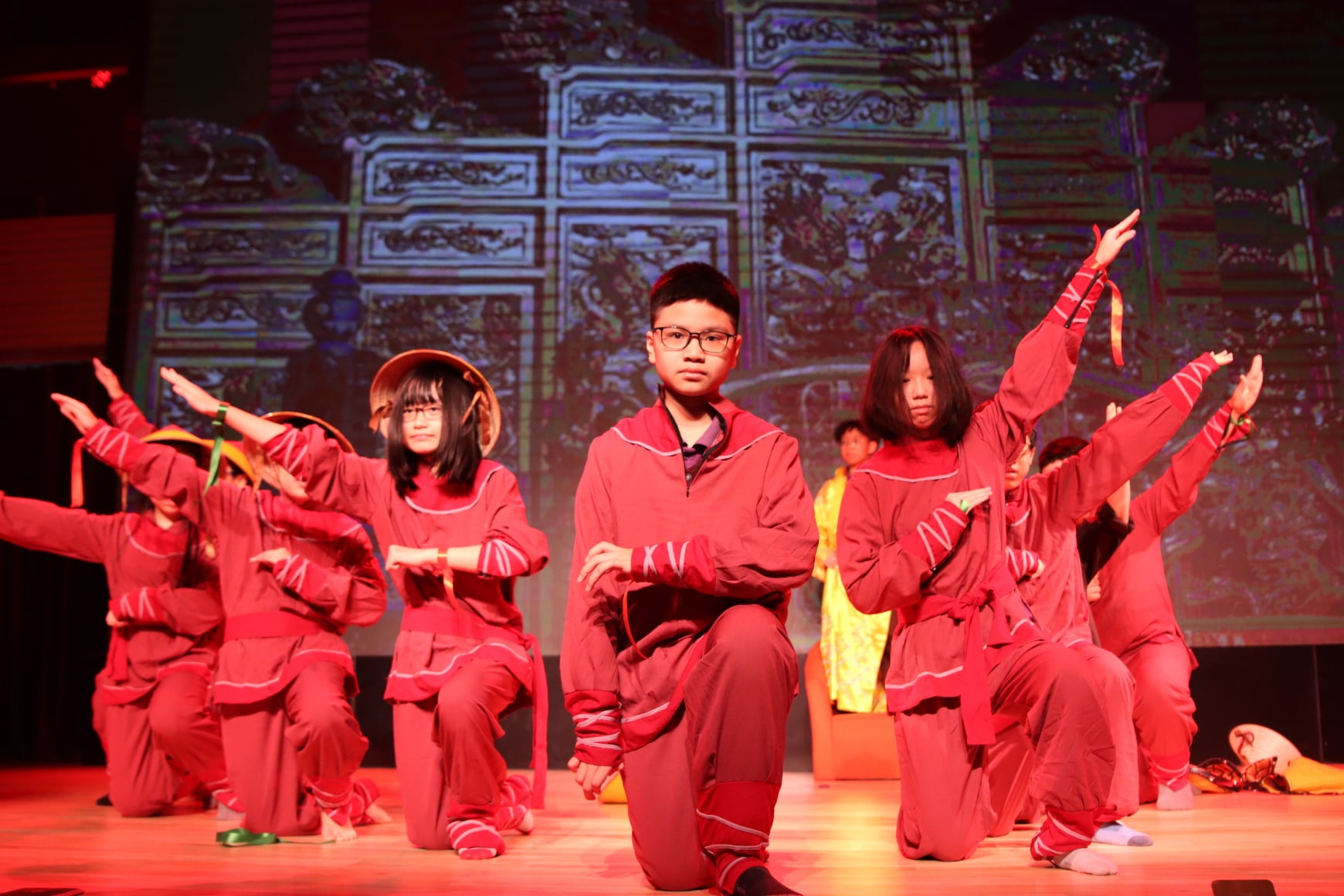 Diversify the theater spaceMs. Hong Lien shared.The drama theater at Olympia not only serves as a subject but can also be used as a pedagogical method and a way to assess students. In general, drama is used as both “lesson input” and a way to assess “output” changes in each student. From a small scale in the classroom, in the last 5 years, the drama theater at Olympia has gradually changed. Students’ showcases have been brought on the opera stage and have attracted students’ and parents’ attention. Reviewing the values of drama, Ms. Hong Lien shared: 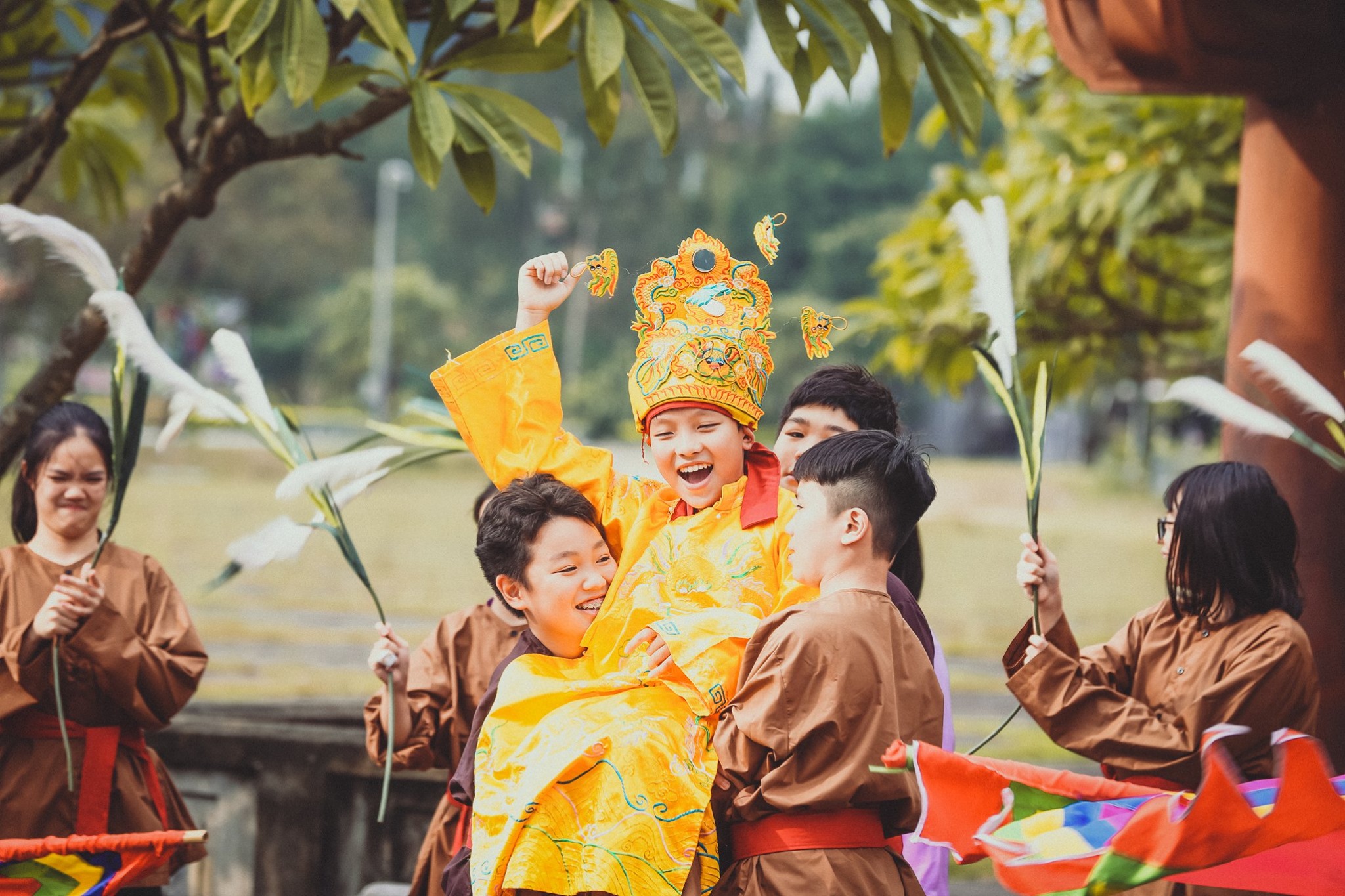 “The traditional way of studying literature teaches students the discrete skills of listening, speaking, reading and writing. However, drama allows students to flexibly combine all the skills to make a complete product. Performing drama is just a tool – like those which help form, develop and unfold students’ minds. When acting, students can interact with their peers, stand in front of the crowd to express their characters. They will see themselves in a different image from their daily lives. It can be seen that drama helps develop a variety of students’ skills when students complete a successful play. There is more to do than merely performing roles.”Drama helps develop children’s language abilities and increase students’ ability to improvise in daily communication. However, to be able to make drama successful is not simple. It is easy to see the advantages of teaching drama when developing multiple skills in children, but being able to teach drama successfully is also a challenge for teachers. Teaching drama is different from acting, but there needs to be a harmony between teaching and acting. A teacher who wants to teach drama has to understand drama but not everyone has the ability to act. Even a professional actor has to take several decades to succeed. Skills and knowledge are just one thing; being confident enough to step on the stage to act is also a difficult problem for many teachers.“We always say to our students that studying drama is an unfolding process for both students and teachers. We ourselves have to study a lot, read a lot, regularly watch plays as well as invite actors like Mr. Xuan Bac to audition and rehearse for the students.” 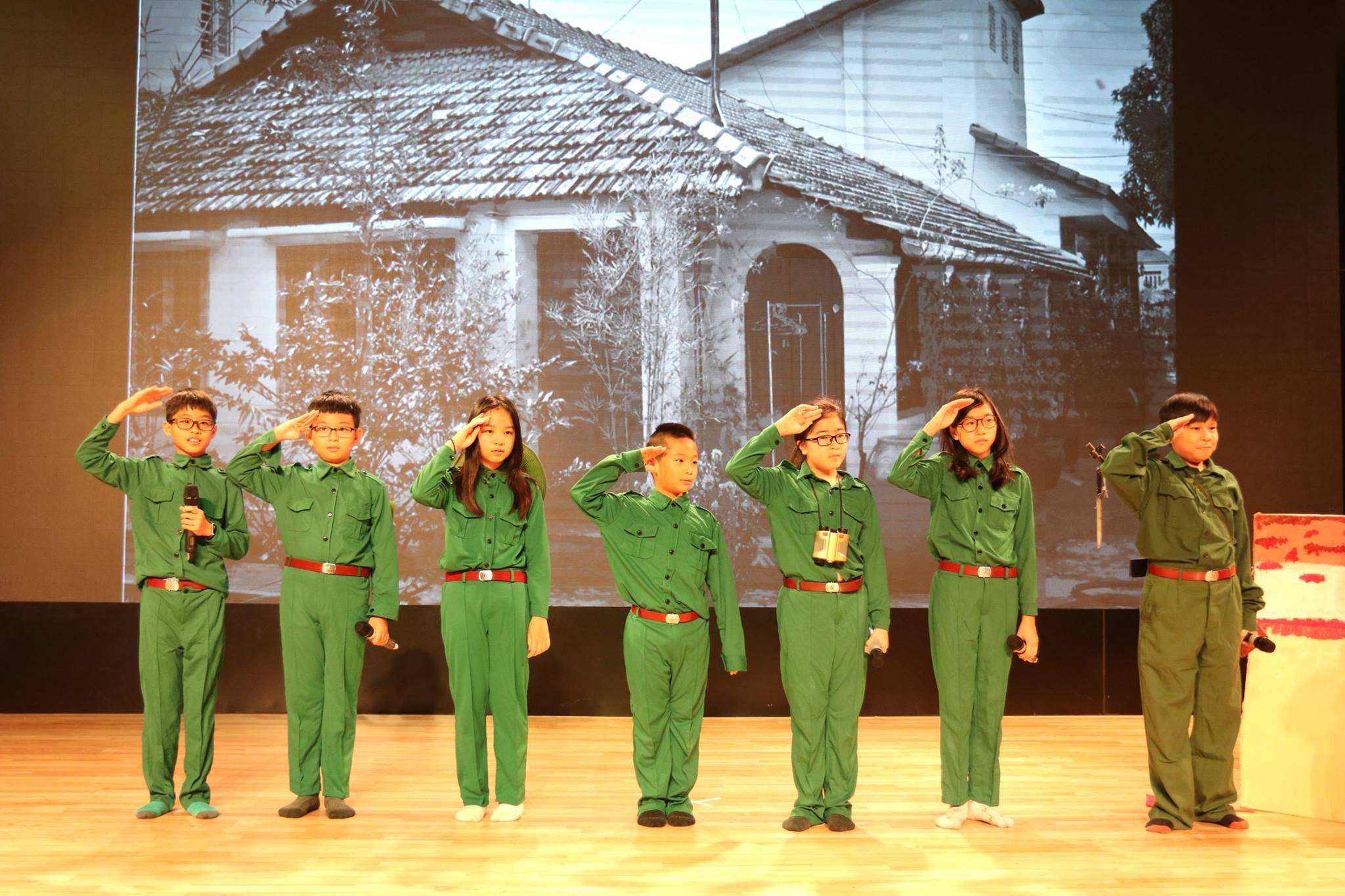 For drama to get out of the boundaries of a subjectThe literary theatricalization at Olympia is programmed based on the output standards of Ministry of Education and Training for drama. In addition, Olympia’s drama program is consulted by experts from the University of Pedagogy. The teachers and students are also trained by the artists at Vietnam Drama Theater, ensuring the education and professionalism of such an art form when being taught at school and the suitability for students at each school level.However, teaching drama at Olympia is not conducted only in the form of a single subject, and does not stressing too much on tests with assessment grades like other subjects. If looking deeply into the values drama brings about, the teachers desire that drama can reach students with real passion and enthusiasm, gradually getting rid of the shadow of a subject.“Beside the traditional theater, we also introduce improvisational drama to students. Without formality and procedures like traditional drama, improvisational plays are more student-friendly and bring stories from their own lives, helping students practice their skills of responding to new situations, of interacting with the audience and of creating an open sharing space. In those dimensions, drama can be seen to be more friendly than a traditional, professional drama theater.” 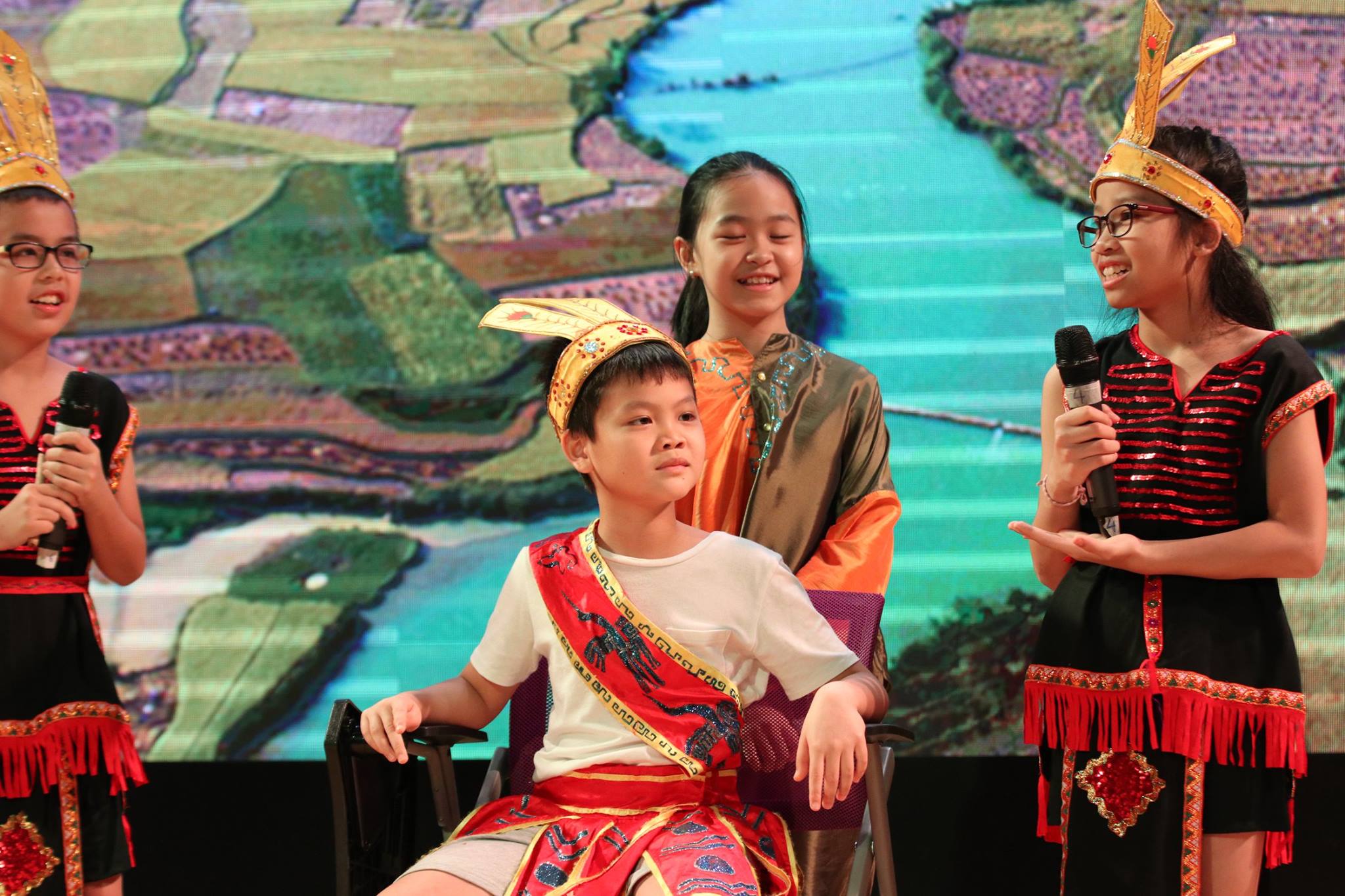 When asked about the method of assessing students on the stage, the teachers all agreed that assessing students was not insisting on their acting abilities but mainly on their attitudes, language abilities and interactions with co-performers. The teachers at Olympia Primary School and Middle School, when teaching drama, all agree on the ultimate goal of teaching drama, despite the different content and approaches. Recognizing drama as part of literature, the teachers want students to reinforce their language abilities comprehensively, to have more passion about literature, and to develop life essential skills. At a higher level, studying drama also helps unfold Olympian students’ creative potentials and arts abilities. Although this is not the highest goal of bringing drama on stage, through lessons and showcases, many artistic talents have been recognized.“On stage, we were surprised by the students’ language and acting abilities. Many of them knew how to improvise very well when they forgot the scripts. They played the roles smoothly, expressing the characters’ emotions perfectly and bringing a new spirit to the play. Theatricalization in Philology has helped reveal many talents and unlock the potential of many students. 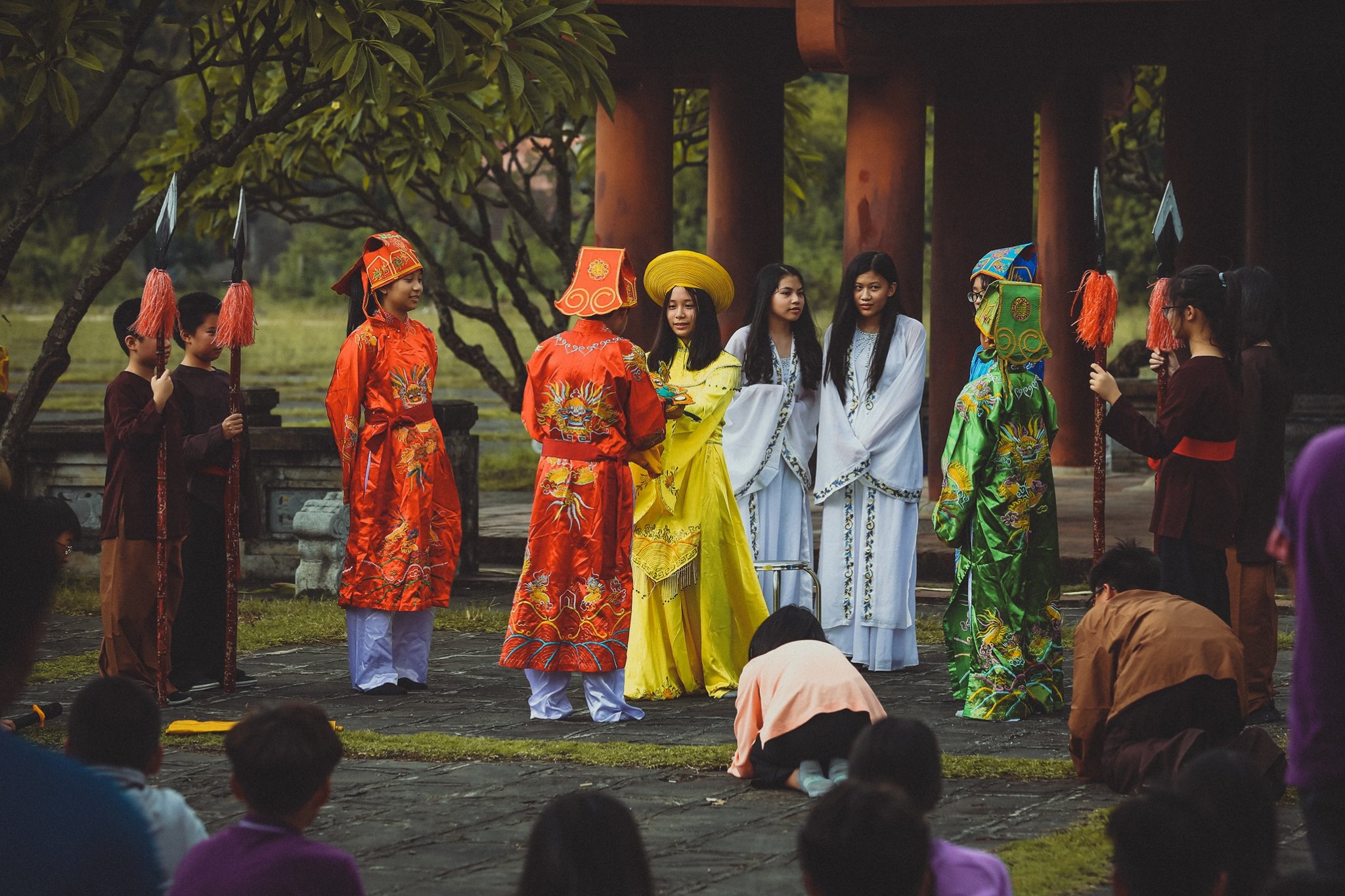 In a school which emphasizes multiple intelligences approach and desires to redefine talent as not based on grades and traditional standards, drama class has really helped many students discover their hidden talents. From language to the arts, the students have had many opportunities to express themselves and try out new fields. It will be too early for the 6th and 7th grade Olympians to decide a future path related to literature or the arts but from the theater stage at The Olympia Schools, they have opened another door to step into the future.

[International Diploma Program] - We wrote, and grew, and wrote some more - Episode 5: MY PURPOSE OF LEARNING

Back to school preparation

Featured news
We care and full-of-lover embrace: Hearts from Olympia to Xuan Phương Primary School and Sao Do Middle School

The story of digital transformation at Olympia